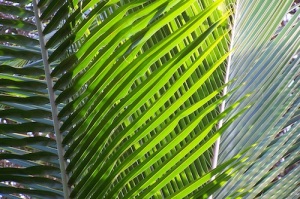 Waving palm leaves today should remind us not just of Jesus' victory, but also of our own penchant for short-sightedness and mis-understanding.

Today is Palm Sunday, so millions of American Christians are going to leave church carrying dried palm leaves folded into small crosses. At my church, we will start the worship service with a crowd of children waving palms in the air while reciting a psalm about how good God is.

Palm Sunday commemorates an event known as The Triumphal Entry: Jesus was heading to Jerusalem for the Passover feast (and to his execution). He had been teaching and performing miracles for just a few short years, yet there were people in every village and city around Jerusalem that recognized him as the messiah, and a crowd of them had gathered at the city gate to welcome him. They didn’t have a red carpet to roll out for him, so as he approached on a donkey, they carpeted the street leading into the city gate with leaves from nearby palm trees and even their own shirts, coats and robes—quite a sacrifice, since many of them likely had only one set of clothes.

Their enthusiasm is understandable, because they knew enough to expect that when Jesus got to Jerusalem, something big was going to happen. They knew that the messiah was supposed to usher in a new kingdom, and they expected that Jesus was going to raise a rebellion against Rome that week and start a new Israelite monarchy.

Of course, something bigger happened that week than most of them expected. Jesus was executed and resurrected, and extended the invitation into his coming kingdom not just to Jews but to the occupying Romans and to gentiles as well. The crowd who welcomed Jesus into Jerusalem was expecting a military coup, because that was their only frame of reference for how the world around them could be changed. Rather than becoming a competing power, though, Jesus showed the world that there is a transcendent power. His life testifies to the fact that that power is dedicated to renewal, not domination.

Until the heavens and earth are divinely renewed, Jesus’ followers are supposed to live their lives in ways that give the world around us a taste of what that future kingdom will be like. We should be as eager and enthusiastic about that privilege as the Israelites who laid their only shirts in the dirt to be walked on by a donkey. But we also need to remember that we aren’t yet made perfect. Despite the beautiful, compelling vision the Bible has for healing and flourishing in our world, we’re still just as prone to short-sightedness and mis-understanding as the crowd who welcomed Jesus to his final Passover.